Andy Stenzler is the Co-Founder of Rumble. Rumble is a boxing-inspired group fitness concept with existing locations in NYC, San Francisco, Los Angeles, Washington DC, Chicago and Philadelphia. Rumble was acquired by Xponential, the largest purveyor of group fitness concepts in the world. Andy is also an operating partner in the hygiene-focused, membership based nail salon concept, Glosslab, and a Founder and Co-Managing Partner of the Lab Capital Advisors, a brand focused private equity fund and start-up incubator.

Among his many achievements, Andy was named an Ernst & Young ‘Entrepreneur of the Year’ in New York City. In addition, he was twice featured on the cover of Entrepreneur Magazine and was named ’40 under 40’ by Crain’s New York Business, as well as being listed ’35 Under 35’ by New York Magazine. The Resident Publications’ deemed Andy one of the ‘Big 100’ in their story on the 100 most influential New Yorkers. New York’s Our Town Newspaper named Andy an East Sider of the Year. Additionally, the Mayor of New York City presented Andy with the Esther Montanez Leadership Award for his work with the charitable organization, the Fountain Gallery. Previously Andy co-founded both the Cosi and Kidville concepts.

Andy received a Bachelor of Engineering Degree from the University of Michigan at Ann Arbor, where he was a J. Ira Harris Scholarship and an Alumni Scholarship winner. Additionally, Andy received an MBA in Finance and International Business from the Stern School of Business at New York University.

The following article was published by PureWow, titled ‘The Ultimate Guide to Boxing Fitness Classes’. 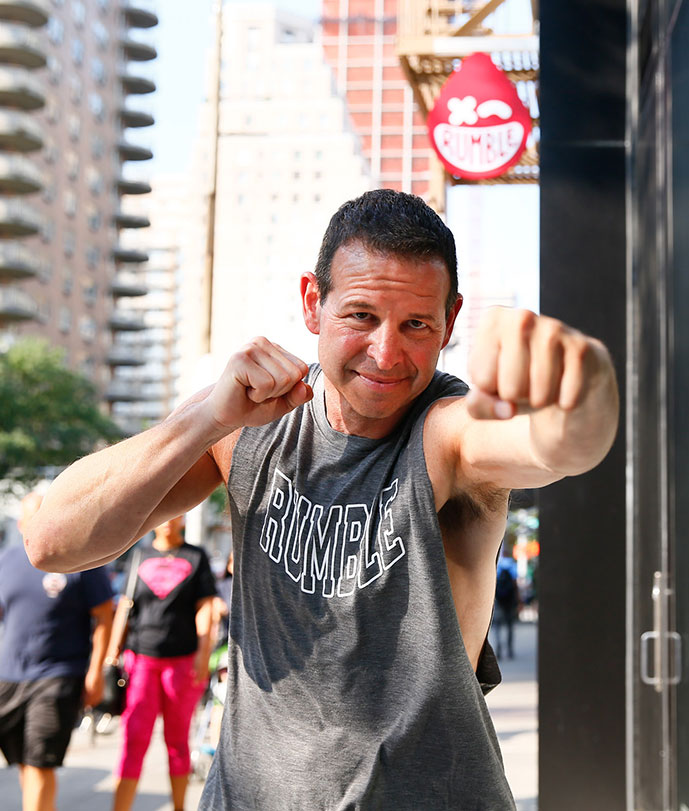 ‘Rumble is the latest rollout of a concept that’s been coming to a boil in New York and other big cities for a handful of years in the wake of SoulCycle: the boxing-as-group-fitness class. Like most good business ideas, Rumble’s origin story is so simple it requires only a few words to tell: “Models started boxing,” says CEO Andy Stenzler. (One need only thumb around the Instagrams of Gigi and Bella Hadid, Adriana Lima or Karlie Kloss for evidence of their interest in the fitness trend.) “It’s really as simple as that. And then other girls started boxing. They realized that it was a great workout. We just wanted to make it accessible and take it out of the realm of the gory underground gym and take away the worry about getting hit. I mean, no one wants to get hit—you want to work your core before you meet your friends for brunch.”

Stenzler, 42, a concept creator and multi-unit expansion specialist (translation: He comes up with ideas for businesses, then replicates them nationally), created the fast-casual restaurant Cosi and rolled it out to more than 100 locations; he’s also the founder of Kidville, a mini-chain of child- and family-focused entertainment and activity centers in a handful of spots around the world, along with five other businesses. He’s a bear of a man with an MBA from New York University, a smile seemingly permanently fixed on his face and an optimistic, ambitious outlook.

On a recent Tuesday afternoon, Stenzler shows us around Rumble HQ. We walk and talk through the clean, white, graphic-laden upstairs, which is dominated by the 35-foot-long dual-level padded bench that, from morning to night, serves as Rumble’s social center. It’s a bleacher-like effect, and behind it are paintings—part pop culture, part boxing iconography—of a young Spike Lee and Woody Allen ready to duel and Jump Street–era Johnny Depp facing off against Full House–era John Stamos by Brooklyn street-centric artists N. Carlos J and Michael DeAngelo.

Upstairs has a more hang-worthy soundtrack than what’s being pumped out below, though it still has everything from old-school hip-hop (L.L. Cool J’s “Going Back to Cali”) to present-day Beyoncé; there’s also a smaller studio used for “privates”—one-on-one sessions with a trainer to learn and hone specific boxing and punching skills. “You’re not going to learn to be a boxer in group fitness,” Stenzler says. (But you’ll learn the rudiments: Before each class, an instructor holds a five-minute “pre-class” to teach newbies six basic punches.) On one wall of the privates room is a floor-to-ceiling graphic of Sylvester Stallone as Rocky—though this Rocky has been transported from ’70s-era Philadelphia to an of-the-moment New York City skyline. 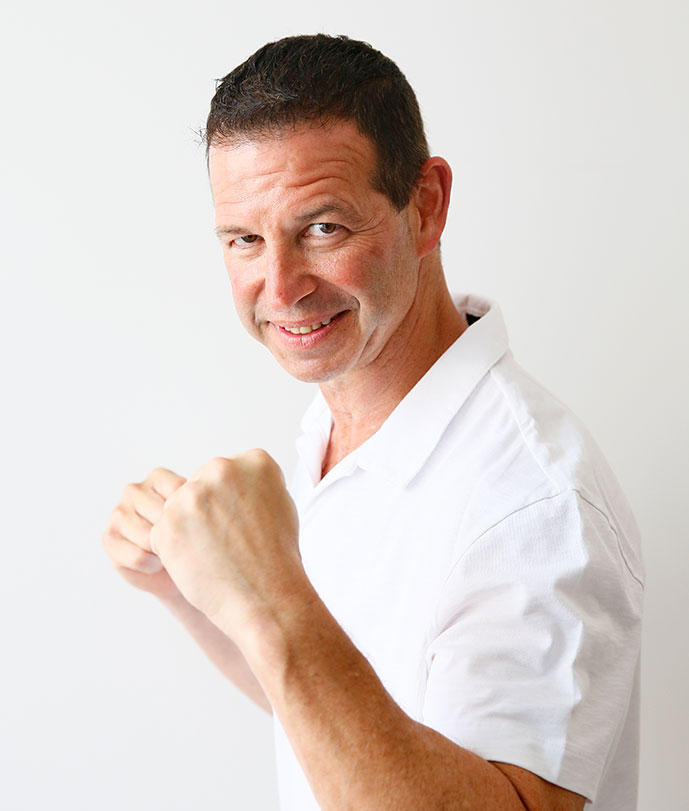 Down the hall, past an array of white lockers—which are decorated inside with nostalgic cut-and-pasted images from the ’70s, ’80s and ’90s (think Britney and Justin in their denim-tuxedoed glory days, the Incredible Hulk, Patrick Swayze, early Madonna)—and beneath an enormous mural of John Travolta and Samuel L. Jackson from Pulp Fiction holding Rumble-branded boxing gloves, are the steps leading downstairs and into the studio. At the moment, five Rumble trainers, a DJ with a laptop, two members of the cleaning and maintenance crew, plus the company’s CEO are assembled as the “class.” At the front of the room on the trainer’s elevated platform is a local elementary school teacher, who’s here to audition to become a Rumble trainer. “Her video was just amazing,” Stenzler tells us.

“OK, eyes up! I want your hands near your face,” the prospective Rumbler—suddenly transformed from soft-spoken teacher to motivational dynamo—shouts cheerfully. “What’s up, everybody?! We’ve got some big dogs here…OK, three, two, one, let’s go! Up! Up! Up! Up!” The entire room—save for the cleaning crew—is following every command coming from the trainer-in-training (Stenzler tells us later that he’s lost 15 pounds since Rumble opened in January). “That’s a tough job up there—you’re really teaching two classes: the bag and the bench,” Stenzler says when the audition’s finally over. “And you’ve got your lights, which you’ve worked on in advance but now have to be controlled and unleashed; your music, which you’ve worked on with our in-house DJ; and your lesson plan, which you’ve worked on with our in-house trainer.”
The stakes are higher than you might think in this audition. This isn’t just any second job or passion project. Trainers are the rock stars of this movement, and becoming one can be life-changing.

What separates Rumble from the other operations is the sheer scale of its ambitions. While virtually every modern iteration of a boxing gym draws inspiration from Rocky, Rumble’s got the actual Sylvester Stallone putting his money on the line for the business. Sly joins about 40 other investors, including singer-songwriter Jason Derulo and Starwood Capital Group CEO Barry Sternlicht. “We just raised $12.5 million, and we’re valued at $50 million,” Stenzler says.

“We’re rolling out eight more Rumbles in the next 18 months.” A second location just launched in Manhattan’s NoHo area, at 700 Broadway at 4th Street, soon to be followed by L.A., San Francisco and two more locations in New York. There’s also an online retail operation selling the pull-on wraps, gloves, hoodies, tank tops and leggings—among many other branded offerings—that are available at the 23rd Street store; bags for your own in-home boxing studio; on-demand video offerings via iTunes that will let you stream your favorite instructor’s Rumble class; and an energy and recovery beverage, Rumble Juice.

Ask Stenzler how many customers come through Rumble each day, and he responds, “600 people will come through Rumble today—that makes us the number-one group fitness studio today in New York City outside of SoulCycle on the Upper East Side, where they have two studios and 117 spots—we’ll never catch them, but today, on this specific day, we’re number one. Seventy percent of all customers are repeat, and Eugene’s ability to know influencers and, frankly, to create a product that the influencers want to come to is great. Emmy Rossum was here yesterday, along with [former New York Jets quarterback] Mark Sanchez and Hannah Bronfman, the big-time DJ. It’s fun that so many influencers want to come here and post about it; we’ve got around 30,000 followers, and we opened in January. Well over 24,000 people have tried Rumble.”

Along with influencers to spread the word about Rumble, crucial to their success is what’s charmingly referred to as big data. “We’re a crazy data-driven company,” Stenzler says, now downstairs at Rumble in a windowless, bunker-like room he calls The Pit. A shaggy-haired millennial in a hoodie, whom Stenzler requests that we refer to as the in-house “data guru,” sits in front of a bank of screens. “We’ll only go to where we can have supersize locations: the Upper East Side of Manhattan and five markets in San Francisco and West Hollywood. We analyze real estate by finding the ten best places to open a Rumble in the United States—those are the ten places we’re going to.

It starts with demographics—the age and income of people in certain neighborhoods, followed by psychographics information—how likely certain communities are to work out versus other communities. Millennials are certainly our number-one audience, though we do well with 40- to 50-year-olds. We still have to make it with 24- to 40-year-olds to be successful in group fitness, though. We’re getting 71% female.”

And where, one might wonder, does all this data come from? “Information you get from social properties,” Stenzler says, slightly cryptically. “Facebook tells you a lot about your customers these days. If you know what you’re doing, it’s pretty simple. Very, very hard, but ultimately very simple. I think the big difference is that a year or even six months ago, if millennials saw advertisements in their feed, they’d feel like they’re being invaded. Now they’re realizing that the ads are in their feeds because they may like them. And they’re clicking on them. Rumble is a brand built on social media.”

Unlike most other group fitness spaces, which are designed to get as many people in and out as quickly and efficiently as possible, the upstairs at Rumble was constructed to invite loitering. It’s here—along that long padded bench—that Rumblers chat with their friends before class; it’s where they meet dates after class; it’s where they bring their laptop to power through work in between appointments.

While Rumble sells their own branded glove-like wraps to wear under their distinctive boxing gloves, more and more clients are taking to wrapping themselves up using 108-inch strips of absorbent fabric to both protect their wrist and look the part, which might be loosely described as part athleisure, part badass. “Boxing has its own swag and style to begin with, so what we’re doing is just playing off that,” Remm says. “People dress a little boxing-esque; they add a little flair. You see a lot of braids in the class, and I’m not so sure those people are wearing those braids outside the class. It gives them an opportunity to wear the part: You go to yoga, you look very Zen; you go to boxing class, you want to look a little tough.” 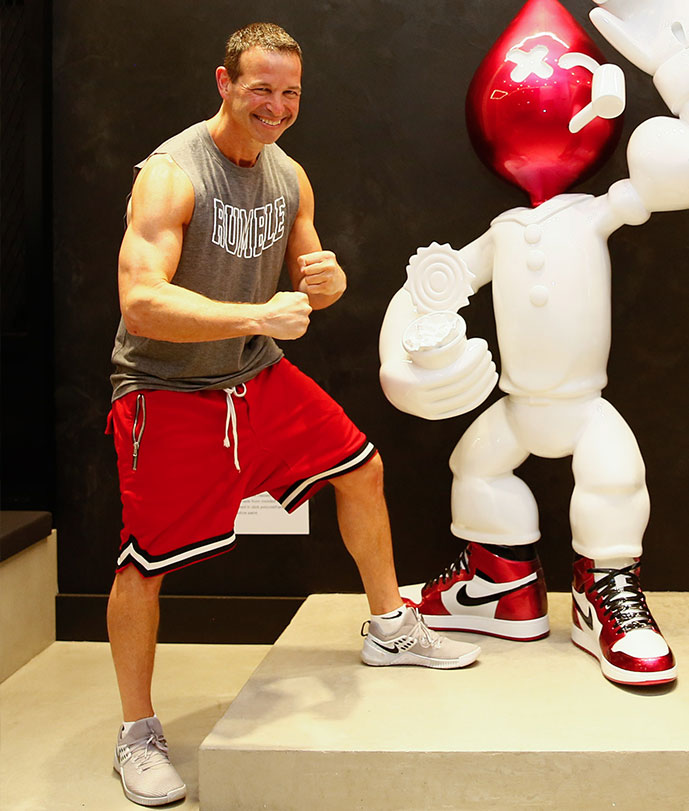 Lifestyle, universe, juggernaut: call it what you will. There is an energy and intensity around the group boxing movement that is at once infectious and unnerving—a mania for perfection and execution that the partners share. They’re not just teaching people how to punch and how to get fit. They’re swinging for the fences.’